Enter your email to unlock the coupon codes:

Let’s go ahead and reveal them, bar by bar.

This was such a unique but also perfect bar for the season that we had to include it.

Oh, and before you jump to conclusions, it’s not a pumpkin spice latte flavored bar! (Although that’s not TOO far off…)

This bar was obviously salt plus another seasonal flavor. If you HAD to guess what the flavor is, just based on knowing that it’s seasonal, it would probably be the first thing that jumps to mind. So we hope you didn’t overthink this one…

We didn’t really know what to expect when sampling this one. And if we’re being perfectly honest here, we didn’t think it really tasted much like pumpkin. What did you think?

Although that isn’t to say that this wasn’t an enjoyable bar! We enjoyed the dark chocolate with a sprinkling of salt, and we think it’s definitely a good autumn bar either way.

All right, now let’s move on to the next one.

This bar takes a very common flavor combination with chocolate (so they’re off to a good start) and combines it with another one to make it unique.

That second flavor that they combined it with is the same as the last bar.

And the other inclusion is…

A proven chocolate maker, Madecasse decided to play by the rulebook here. Take some high-quality, heirloom cocoa, build the bar all the way from the bean, toss in some almonds, and finish it with some sea salt.

This bar is definitely the one that stands out from the other two.

One, it’s white chocolate, not dark. Two, it did NOT contain sea salt as an inclusion.

So what did it contain? Let’s see. 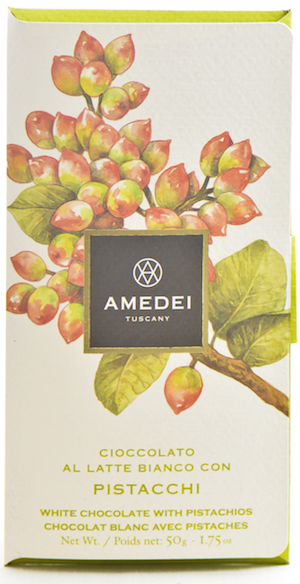 White Chocolate with Pistachios by Amedei

We’ve had Amedei in a couple other previous boxes and we like them because they’re a quirky but high-end Italian chocolate maker. The descriptions of their bars on the boxes are very exaggerated and romantic — and we love that.

How did you like it? We’d love to hear!

Use code MOM3 for $3 off any 3 month subscription.

Use code MOM6 for $6 off any 6 month subscription.