First Mystery Chocolate Box of the year! (Now THAT’S the best way to start the new year off, if you ask us.)

We put a super fun box together for you this month, and hope you loved it! Tell us all about it, of course, if you’d like. We always love hearing from you!

Alright, no further ado. Let’s tear into this box:

The maker of this bar had their debut in a Mystery Chocolate Box last year, and we liked their bar so much that we brought them back this month for an encore.

The first bar was a delightful milk chocolate bar (with a flavor, of course) but this one is a dark bar. How did it fare?

Well, we’ll get to that in a minute. First, we must discuss the inclusion…without revealing what it is yet, of course. It’s a spice, originating from Asia, that has quite a delightful aroma and taste, if you’ve ever had it before.

However, it isn’t something that we’ve seen included in a chocolate bar yet. So when we first tried it, we were (a) looking forward to it very much and (b) not quite sure what to expect. (About what you’d expect to feel when trying a new chocolate bar, I suppose.)

As you would probably guess, it turned out great. And we included it in this box so YOU can also try it and form your own opinion… 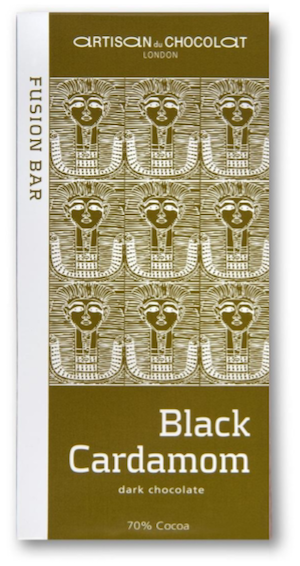 Black cardamom, according to various food authorities, is the raunchier member of the cardamom family. It’s supposed to have a stronger flavor than standard cardamom, although, to be honest we didn’t really tell the difference in this bar. (Not that we’ve had a chocolate bar with REGULAR cardamom, but you get the idea. You don’t get slapped in the face with cardamom flavor when eating this bar.)

Oh, and the aforementioned debut bar? The delicious 40% Milk Chocolate with Ginger & Lemongrass from April 2016!

This bar comes from a chocolate maker that we’ve included in more than one previous Mystery Chocolate Box. Three other boxes, to be precise.

It’s ALSO a flavor that we’ve included in more than one previous Mystery Chocolate Box. Two other boxes again, to be exact!

So, let’s see what it was and then we’ll talk about comparisons… 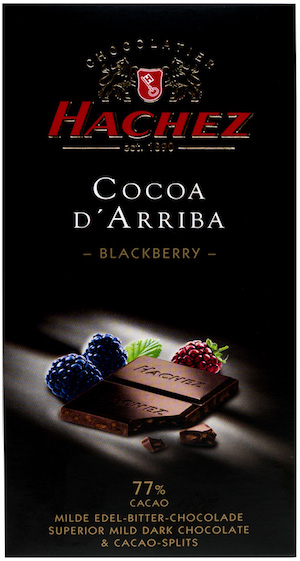 So, the other two blackberry bars that we’ve included have come from Chocolate Santander (April 2015) and The Chocolate Conspiracy (June 2015). And the other Hachez bars have been Mango & Chili, Strawberries & Pepper, and Milk Chocolate with Orange Brittle.

How did this bar compare? Well, obviously, chocolate is very subjective, so our opinions could vary widely from yours.

That said, what are our opinions? As far as blackberry bars go, we liked the Santander bar most. Then, the Chocolate Conspiracy bar, and lastly this one. Why? Well, this is a very bitter bar, and we prefer our bars to have a tad more sweetness. However, if you love bitter chocolate, then you’ll likely put this one at the top of your list!

Now, how does it compare to the other Hachez bars?

Again, only our opinion here, but we found it VERY similar to the other two dark Hachez bars. Same bitter chocolate, only slightly different inclusions. Plus, one other commonality that irked us a bit: the flavors aren’t strong enough. We’d love it if the blackberry flavor was more pronounced (same with the mango/chili flavors and strawberry flavors in the other bars).

However, the milk chocolate with orange bar was a different story. Since it has the milk flavor added, it wasn’t nearly as bitter.

This bar most likely wasn’t very hard to guess. It’s a classic flavor combination, so the inclusions should have been pretty easy to place after having a square or two.

Like the other two bars, this was not the first time the chocolate maker had been included in a Mystery Chocolate Box. With three previous appearances under their belt, this chocolate maker is a veteran.

But, all that means nothing when it comes down to tasting. Was this bar as good as the others?

It’s all up to you, your taste buds, and this bar.

For now, let’s reveal what it was…

Something you’ve surely heard of and tasted before, so that’s why we say it shouldn’t have been too hard to guess. (Although if you had no idea what it was, don’t worry. Guessing chocolate flavors is MUCH easier said than done…part of why Mystery Chocolate Boxes are so much fun!)

And that concludes the box!