How Eating Chocolate Can Help You Lose Weight 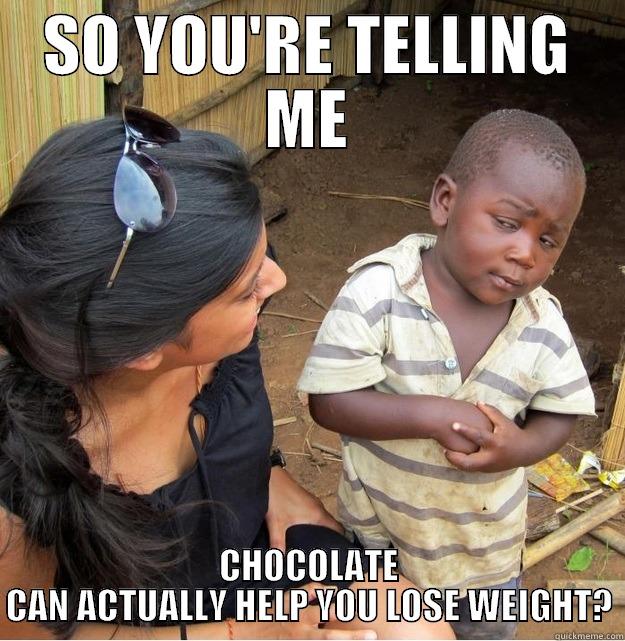 Sound too good to be true? It’s not. Really.

We at Mystery Chocolate Box are obviously big proponents of chocolate, so we thought we would scour the web and come up with some crazy ways that chocolate could actually help you lose weight. However, we actually ended up stumbling on some legitimate evidence that proves chocolate to be a good source of many powerful healthy nutrients — some that are even beneficial when slimming down!

Now, unfortunately, we still haven’t found that one elusive scientific study that says you can eat three chocolate bars a day and still lose weight*, but this is still awesome news.

* This could actually work. If that’s the only thing you eat. (Breakfast, Lunch, and Dinner, perhaps?) Brilliant! We’ll have the brand new, latest and greatest “chocolate diet” hitting bookshelves near you very soon…

Anyway, let’s explore the various ways in which chocolate helps turn your body into a fat burning machine.

Insulin is one of those tricky hormones. It’s necessary for your body to function, but if it doesn’t behave correctly, it can help increase fat storage.

Why? Because insulin’s job is to send blood glucose into cells. Too much insulin release over time and cells become resistant to insulin, which tricks them into thinking they’re starving. When cells think they’re starving, they signal to the body to send more food over to store as fat.

Here’s where chocolate (dark chocolate, to be exact) comes into play. Studies have shown that people who ate dark chocolate instead of a more sugar-laden option like white chocolate had significantly LOWER insulin resistance (which is good!).

Score one for chocolate!

Dark chocolate has been shown to be the most filling type of chocolate as well as a craving reducer. There was a very interesting study done in 2008 in Denmark. See if you can spot the two interesting points here:

Subjects were given either milk or dark chocolate to eat and then, two and a half hours later, they measured their level of satiety (fullness) and were told to eat as much pizza as they wanted. The group who ate dark chocolate ate 15% less pizza AND noted that their cravings for junk foods were lower than the other group.

What are the two interesting points out of this study?

(Point #2 suggests to have your Mystery Chocolate Box tasting BEFORE dinner. Interesting idea…)

Stress is not good when trying to lose weight. Why? It’s related to the first point, actually.

In a 2009 study, subjects who suffered from anxiety ate 1.4 ounces of dark chocolate (a little more than a half of a full size bar) every day for two weeks. At the end of the study, the group’s cortisol levels were decreased.

“Choc” up another win for chocolate! (get it?)

If you’ve haven’t been living under a (health) rock for the last ten years, then you’ve heard of flavanols. If you haven’t, flavanols are:

So then, what are oligomeric procyanidins?

Researchers have identified oligomeric procyanidins (also known as oligomeric PCs) as the most beneficial flavanol in chocolate for weight loss. What do they do?

Well, the short answer is they help with #1 above — they help lower insulin resistance, which helps lower your appetite and avoid fat storage.

5. Chocolate eating has been linked to a lower BMI

Recently, researchers at UC San Diego found that in a sample of over 1,000 people of all genders and age ranges, the “chocolate eaters” in the group had a lower BMI (Body Mass Index), despite the fact that they didn’t exercise any more and ate slightly more calories and saturated fats than the rest of the group.

Even when adjusting the data for different variables like age, gender, physical activity, and anything else, chocolate consumption was still linked to lower BMI.

In a survey done on a weight loss community website, 91 percent of people who lost 10% or more of their bodyweight ate chocolate while slimming down.

Hooray for dark chocolate, then.

Now, you’ll notice that it’s DARK chocolate that is mentioned in all of these studies. Because these beneficial health qualities come from cacao, only dark chocolate has (1) a high enough cacao content to deliver these benefits, (2) a low enough sugar content to not negate all this good stuff, and (3) meaningful fiber content.

We’ve prepared a short guide that covers the key points from these insights. Here’s how to continue to enjoy chocolate while dropping some pounds

One of the bars in the upcoming July 2014 box (which we’ll be shipping out in a couple days) contains only 8 grams of sugar per serving (and contains a very healthy ingredient)! Perfect for the recommendations above — but don’t worry, it tastes great 🙂

Beyond that, we actually know about some chocolate bars with MORE fiber than sugar! Would you be interested in trying one of these bars out? Let us know and we’ll consider putting one of them in an upcoming Mystery Chocolate Box!

No Replies to "How Eating Chocolate Can Help You Lose Weight"

We're celebrating the holidays with special offers on all Mystery Chocolate Box gift subscriptions of 3 months or more:

Use code CHEER4 for $4 off any 3 month gift subscription.

Use code CHEER7 for $7 off any 6 month gift subscription.

Use code CHEER13 for $13 off any 12 month gift subscription.