Enter your email to unlock the coupon codes:

Ready to see what was in the September 2016 box?

Remember, this month was all about combinations. So this means we’ll be looking for at least 2 inclusions in each bar…which means this was a pretty interesting month!

How did you enjoy it? Don’t forget to let us know!

Anyway, on to the bars…

Now, about the flavors (yes, flavors plural…remember each of these bars has at least TWO inclusions!). This bar included a pair of flavors that usually isn’t combined…not in chocolate at least.

But once we tasted it, we wondered why people don’t combine these flavors more often! It’s really a fantastic combination. 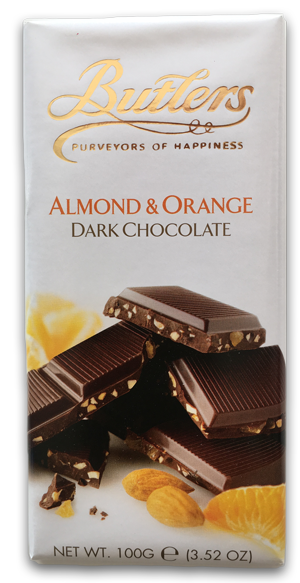 We’ve included their honeycomb crisp and butterscotch bars (all milk chocolate) before, so if the wrapper looks a bit familiar, that’s why. And, we’ve loved all of them.

There’s something about the chocolate in this bar (not even getting to the inclusions yet). It has a fantastic creaminess to it, but it’s a regular dark chocolate bar.  (Can you tell we love when chocolate makers find a way to make dark chocolate bars slightly creamy?)

Now, on to the inclusions… the main focal point of your efforts, of course, since guessing them is the name of the game!

There are two inclusions (just like Bar A), but one ingredient is very similar between the two bars (nope, it’s not exactly the same) and the other ingredient is VERY different.

Alright, enough chat, let’s reveal it and then pick up after the jump…

First things first…Yes, that’s really the name of their company. Snake & Butterfly — pretty awesome right? We sure think so.

Anyway, back to the inclusions that we were talking about. Comparing it to Bar A, the cherry is fairly similar to the orange — both fruity, sweet flavors.

But where the bars tasting profiles start to diverge in wildly different directions is the other inclusion. The almonds in Bar A continue the nice, sweet path started by the orange. Sweet tasting bar — nice and tidy. No split personalities here…

“Yes, I’m a nice sweet chocolate bar. Yes, that’s my real name. No, I don’t wake up in the middle of the night thinking I’m a forest fire.”

Totally different story. You probably noticed it about 8.5 seconds after biting into your first piece.

This thing gets a bit fiery, doesn’t it? Whereas Bar A starts and finishes nice and sweet, this bar starts off sweet as well — a bit sweeter than Bar A, perhaps, but then the chili gets a bit jealous we reckon…

“Hey cherry…it’s about time you stop dominating this hapless chocolate eater’s taste buds with your sweet nonsense. I’ve had just about enough of you, so I’m going to step out on the stage and take over in 3…2…1…” (commence flame throwing)

(Yes, we really imagine the flavors battling it out inside the chocolate bar. Don’t ask. It’s just more fun this way…so try it maybe?)

And then the bar finishes off with a slow burn.

Now, none of this is to complain. Both of these are amazingly delicious chocolate bars that start off in similar fashions…and then get very different.

Alright, now we’re on to the last bar of the box.

Now this one IS an example of a bar that has a bit of an identity crisis.

You see, it couldn’t decide if it wanted to be a dark chocolate bar or a milk chocolate bar…so it decided to be both. That’s right…

This is a “dark milk” chocolate bar. Yes, it’s a real thing. No, we didn’t make it up. Yes, we’re taking bets on how long it is until we see a “milky dark” chocolate bar*

Anyway, back to the bar itself. The oddities are actually just getting started with the “dark milk” classification.

They continue when you see what the actual inclusions are:

Considering the fact that 93.76% of Americans don’t know what Tahini is (real fact, we promise**), we did the courtesy of Googling it for you.

It’s a condiment made from sesame seeds used mainly in the Mediterranean and Middle East. So there.

Wait, now hold on. The purists among you might be raising their pitchforks and saying “Now hold on a minute there you chocolate dishing subscription-folk….you said each bar had two inclusions. Technically, since tahini is made out of sesame seeds, it’s really only one inclusion.”

Our sophisticated, educated response to that?

Go grab a chocolate bar, take a bite, and see how much better you feel.

Alright ladies and gentlemen, that’s that!

Your ride aboard the Mystery Chocolate Box, September 2016 edition is over. Please exit using the door at the rear, and make sure to exercise caution when stepping down. Handrails are your friend. Oh, and don’t forget to collect your bags from the storage section. Any unclaimed baggage will be examined for chocolate bars and promptly discarded (not the chocolate bars, of course, only the baggage that contained the chocolate bars. Naturally!).

Lastly…what did YOU think of this box?

And who can’t wait for the next one??